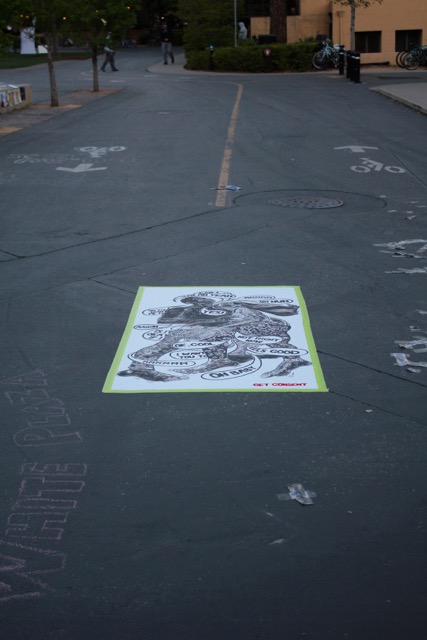 This guest post was written and printed with permission by Eva Jordan.

There’s a lot of discussion now on the Stanford campus about affirmative consent (“yes means yes”), which is terrific, but I’m not sure that people always know what that looks like or sounds like. It often evokes a man procuring permission from a woman for penetrative sex – a single exchange for a particular act, in a hetero context. That’s is a good starting point if you’re looking to prevent rape, but it’s pretty basic and omits so much about what it means to be a good, respectful, and enjoyable sexual partner, and what it means to communicate, which is the only way to ensure a truly consensual relationship.

I wanted to present an image of empowered, ongoing, active consent, in which the couple is communicating about their actions through questions, answers, and mutual sounds of pleasure. At a recent Take Back the Night event, a speaker said, “If it’s not a ‘F**K YES,’ it’s not a yes!” and I think young people need to really understand this. Sometimes sexual partners acquiesce because they feel pressured, but a reluctant or hesitant yes isn’t a true yes, and yes should be a fluid process (so to speak), not a lone phrase.

The piece is a 3’ x 6’ hand printed linoleum block print, which I put up all around campus. It’s an image of a half-clothed couple in a sexual embrace. The word bubbles that weave around them represent a dialogue of desire, flowing around the bodies the way information ought to flow between people who are having sex: playfully, respectfully, and, ideally, with input from all aspects of self and body (hence the words continue even down to their feet). 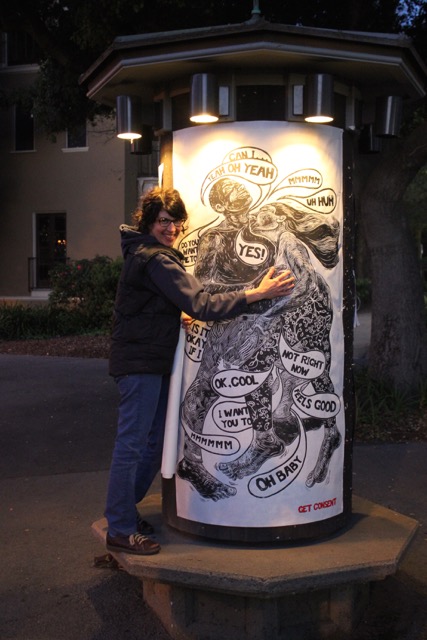 I especially wanted to show the woman possessing agency and being an equal participant. One of the most striking features of my own experience of stranger rape was the echo in that act of all the times I had felt subtly coerced by sexual partners, and had lacked my own full voice. I had no prior history of sexual violence per se, yet I perceived rape to be the ultimate expression of a familiar dynamic, and that was a wake up call for me about the challenges women, in particular, still face.

Although children ought to be having age-appropriate conversations about sexuality and consent all along, college is a crucial time to educate on these issues and to support our youth with real skills and understanding. I live on the Stanford campus and am privy to the lives of undergrads, and despite our progress in many areas, the culture here is still shadowed by misogyny, body shaming, and an inherited, ill-conceived image of masculinity, all of which intersect with unexamined attitudes about race and class to create an atmosphere in which many people feel at times unheard or unsafe. While I want women to find their full voices, and that’s a huge part of the equation, I believe the onus is primarily on the men—young male students as well as their older mentors—to sensitize and re-train themselves to become people who would never perpetrate any of the many gradations of violence, or stand by while others do so.

The good news is, young folks have elastic, eager minds and a little bit of learning can go a long way! It’s been beautiful to see the activist culture bloom on campus this past year, as students (including many men) speak their truths and agitate for change around gender-based and relationship violence. I hope my own art-based activism will add to the sense that students are held up in their efforts by a larger community that cares and holds hope.

Eva Jordan is an artist and stay-at-home mother who has also worked in the fields of psychotherapy and garden design. She lives with her family next to a freshman dorm on the Stanford campus as a Resident Fellow, where she supports and helps shape the culture of the dorm. She is an IMPACT graduate. 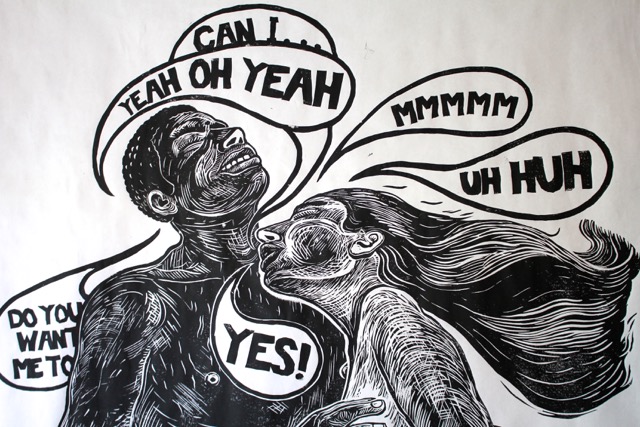